The painted décor by Pietro Ricchi

Visit the châteauLocation and contacting

The frescoes of an Italian artist

Pietro Ricchi (1606-1675), born in Lucca in Tuscany, was trained on the great building projects of Florence, then in the workshop of Guido Reni in Bologne.
He came to seek his fortune in Lyon, where a a number of Luccan merchants and bankers had established themselves.
From his four year sojourn (Provence, Lyon, Paris), nothing survives except the décors of the château de Bagnols (Rhône) and above all those of the château de Fléchères.

The recourse to an Italian artist, the method used (fresco painting), very common in Italy but rare in France, especially in a secular building, the scale of the commission (all the rooms except the temple) is doubtless explained by the wish to reaffirm the Italian origin of the Sève family, imaginary but made official a short while before by the Duke of Savoy...

In 1594, Jean Sève had been one of the leaders of the uprising which had brought Lyon back under the authority of Henry IV, after five years of dissidence.
In 1595, he organised the Grand Entrance Parade for the king in the form of a procession in which soldiers and notables took part.
To evoke this key moment in the rise of the Sève family, Pietro Ricchi presents all around the room the soldiers who appear in the engraving of the event: drummer, standard bearer, musketeer, etc.
They are dressed in the style of Henry IV because Pietro Ricchi was inspired by drawings after Goltzius (1589).

In the era of Louis XIII and its tensions with the protestants, one can understand the interest of Mathieu de Sève in celebrating the memory of an event by which his family had shown itself to have been very useful to the first Bourbon king. 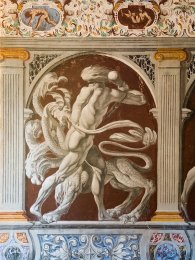 The Albret, maternal ancestors of King Henry IV, pretended descent from the Greek hero, and Henry IV would often be celebrated as ‘the French Hercules’.
For his entrance into Lyon in 1595, Jean Sève had therefore made triumphal arches and statues to the glory of the two heroes.
The room painted by Pietro Ricchi evokes the decorations for the fête and his Hercules has, quite evidently, the visage of Henry IV.
Hercules was the model of the man who accepts the trials of destiny to achieve eternal salvation. His exploits had therefore taken on in the 17th century a symbolic meaning. For example, the fight against the Lernaean Hydra would represent, according to the context, Christ descending into Hell to liberate the souls, the struggle of a christian against sin, of the protestants against the Catholic League or Henry IV against civil wars...

Architectural designs painted in perspective were common in Italy at the beginning of the 17th century but still rare in France.
Pietro Ricchi does not follow Italian models but takes inspiration from some Dutch drawings by Vredeman de Vries.

This room was perhaps intended as a souvenir of one of the most magnificient fêtes of the Renaissance, that of the solemn entrance of Henri II into Lyon in 1552. It was the great uncle of Mathieu de Sève, the poet Maurice Scève, who had organised this with the celebrated Italian architect Serlio.
The painted perspectives on the royal route had been particularly admired.

Four young women symbolise the cardinal virtues, Justice, Courage, Temperance, and Prudence. The twisted columns evoke the Temple of Jerusalem which featured similar columns according to medieval legend. In the fête in honour of Henri II in 1552, one of the triumphal arches dedicated to the cardinal virtues was similarly decorated with spiral columns. 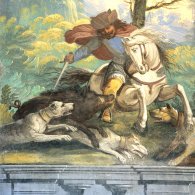 In the Antichamber on the ground floor, which was used for meals and reunions with family and friends, the frescoes represent hunting scenes. These have a moral meaning, each reprenting a vice which we must drive out of ourselves: the lion (pride), the boar (luxury), the deer (misanthropy) and the panther at the mirror (the illusion of the senses).

The XVIIIth century apartmentVisit the château